An American artist, his works are still returning in culture today popular motifs. The most famous of these are Campbell soup cans or portrait Marilyn Monroe. Warhol, as a representative of pop art, made heroes of his works elements of everyday life, such as the mentioned cans of soup, coca-cola, bananas or washing powders, thus expressing American consumerism.

American painter, representative of the color field painting trend. His paintings were focused on colors and straight lines. He was primarily interested in the emotional aspect of colors. His works are characterized by symmetry and figurativeness.

The work of the Mexican artist was characterized by a unique style. The heroine of almost all her paintings is herself. In her works she often raised the subject of physical pain and suffering, which was probably influenced by The health of the artist herself, who suffered a serious accident at a young age. Her works she combined elements of surrealism, symbolism with folk art.

The father of surrealism. The work of the Catalan painter still evokes many emotions and they stimulate the imagination. Unusually juxtaposed and deformed elements of its the paintings give them an amazing character. Dali was considered to be one of the most

Austrian painter and graphic artist. Pioneer of Viennese modernism. Works by Klimt is characterized by rich ornamentation and use of gold. One of the most the artist's famous paintings "The Kiss" is the culmination of this "golden period" of his work.

Norwegian painter and graphic artist. His most famous painting is "Scream", one of the the most frequently reproduced and reworked images in the world. One of the most important and innovative modernist painters. His paintings were distinguished by a strong contour and rich colouring. A constantly recurring theme of his works were motivated by death and human fears, which he was not afraid to present directly.

One of the most famous contemporary painters. Co-creator of Cubism, nevertheless, his initial works were created in a realistic style. The paintings from the cubist period of his work has given him a place on the pages of history arts. Cubist works are deprived of principles and rules of perspective, in favour of geometric and simplified elements.

Spanish painter of the Romantic period. Known primarily as a portraitist and genre painter. Today he is often referred to as "the last old master and first modern painter" thanks to his great influence on the development of painting in the following centuries. In his work, Goya was the first to combine elements of the former art with those close to modern art.

A leading representative of French impressionism. By many researchers he is called

the father of impressionism. In accordance with the idea of this trend, Monet's works emphasized The transience of the moment, lighting and mood. The most important element of his paintings was light and color extraction. One of his most famous works is "The Woman from umbrella".

The Danish painter is regarded as a precursor of Post-Impressionism. Van Gogh started painting relatively late, initially creating realistic paintings, but until he has written himself down in art history as a post-impressionist painter. Underestimated for of his short life, today he is considered to be one of the most recognized artists.  For many, Van Gogh is known not only for his work, but also a turbulent life and difficult character.

Dutch painter, considered to be another master of chiaroscuro. For his work painting is composed mainly of genre scenes, usually scenes taking place indoors. Often in many of his paintings the artist has presented himself. The characteristic feature of his works are also curtains that somehow separated the viewer from the work, like theatrical curtains. To his  most famous works we can include  "Girl with a Pearl Earring" or "Marriage of Arnolphini’s".

Dutch artist, today considered to be one of the most important Dutch painters. He created during the so-called "golden age". In his works he most often drew on biblical themes. He mastered the art almost to perfection of rendering reality on canvas, he was also a master of chiaroscuro play.

Italian painter, in his paintings he was running away from the renaissance idealistic aesthetics, thanks to which it is considered by many as an art reformer European and precursor of baroque painting. In his works he often reached to the biblical figures, however, showing them in a plebeian way, which in his time was very controversial. His painting is dominated by dark colors, the game chiaroscuro and extraordinary detail.

Italian Renaissance painter, as well as an architect, inventor, mathematician and more.

The painter did not have any formal education in art. Thanks to his self-confident talent is still considered to be one of the the greatest artists of all time. Today it is hard to find a person who does not know what his most famous works look like, such as "Mona Lisa" or "The Last Supper".

An artist of Florentine origin, commonly known as the author of frescoes in the Chapel

The Sistine. He created his greatest paintings using the oil technique, and they were dominated by grays and blues, as well as by distinct reds, oranges and yellows. 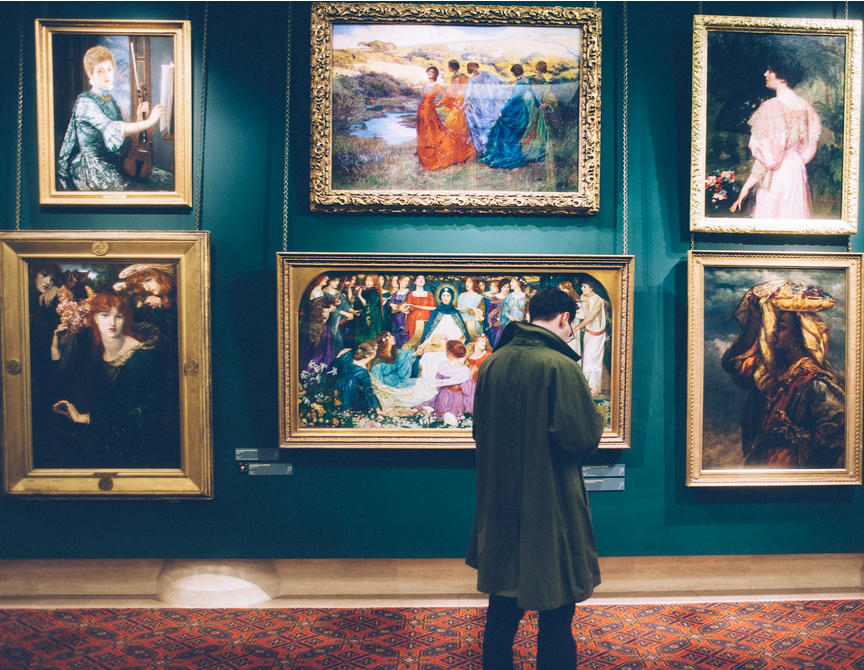 Photo by Clem Onojeghuo from Pexels